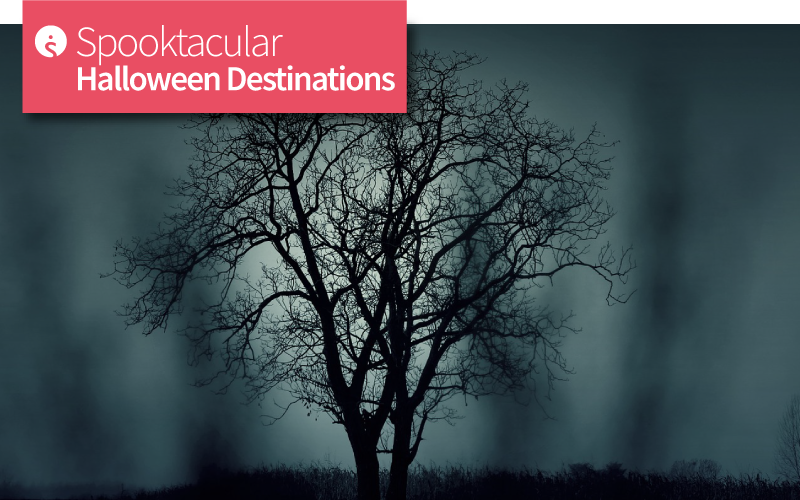 As the UK is home to some of the spookiest paranormal activity in the world, visiting spooktacular destinations for Halloween is a must for ghost and ghoul hunters! And with that in mind, we’ve put together five destinations offering haunting stories and scary sightings to sink your teeth into for Halloween and all year round! According to the Guinness Book of Records in 1989, Pluckley was the most haunted village in England. Sightings include a Watercress Woman who reportedly haunts Pinnock Bridge and local residents and tourists have spotted her a few times! She sits smoking a pipe, drinking gin and holds watercress that she has picked from the river bank! The Screaming Man is another regular in this village! He fell to his death at the local brick works and some say you can still hear his screams in the night! Pluckley is located eight kilometres from junction M20. For an overnight stay, nearby is the Days Inn Maidstone. This is a great base for all of your ghostly discoveries in Pluckley and further afield. The Stocksbridge Bypass is known as the most haunted road in Britain. One night in 1987, workers on the bypass reported sounds of children laughing and dancing in a circle. As soon as the children saw the workers watching them, they vanished into thin air!

And this wasn’t the only spooky sighting!

Police were called to investigate the following night. A figure appeared at their car window and unsure of what they had seen, they drove further down the bypass. The car felt like it was being violently shaken and being hit by a larger vehicle! However, there was no damage to the police car. This only adds to the mystery of why this location is so haunted! Either way, you will not want to bypass this road on Halloween if you crave a spooky encounter!

For a convenient overnight stay, try The Fairway Barnsley. It’s only five miles away and offers comfortable 3-star accommodation. The hotel is a good base for families and has a menu for children and a playroom. This hotel is perfectly located for relaxing after a spot of ghost hunting! In 1848 the Warstone Cemetery in Birmingham opened. All these decades on and it’s known for its ghostly goings-on! Frequent visitors include a spirited woman and The White Lady! Many people have seen these two ghosts walking or sitting in the cemetery. The White Lady has been known to wander further than the graveyard too, with some motorists claiming to have seen her in the middle of the road! The cemetery is Grade II on the register of parks and gardens of special historic interest and is worth a visit any time of the year! It’s located in Birmingham’s famous Jewellery Quarter.

The Radisson Blu, Birmingham is in a prime location for a stay in Birmingham and is convenient for visiting the Jewellery and Chinese Quarters.

Known as the ghostly underground of Scotland’s capital city, Edinburgh Vaults is the ultimate Halloween attraction that brings to life the city’s spooky past! It’s reported the Vaults were the hunting ground for serial killers long gone so keep your eyes open!

Over the years, tourists have crossed paths with a vicious poltergeist. Lights on the wall have smashed on their own accord. When the caretakers have replaced the bulbs, it hasn’t taken long for the same thing to happen again! Also keep your eyes open for The Watcher and listen out for children crying and hushed voices!

To calm your nerves and recover from the Vaults, finish your day with a stay at the AmarAgua Guest House. Built in the 1880s, not too long after the Edinburgh Vaults were completed, the guest house is in an ideal location for discovering all of Edinburgh’s landmark attractions. In 1865, City Varieties Hall opened its doors. Over the centuries, the list of paranormal sightings at the theatre has grown! A man in a bowler hat who sits alone on stage next to a piano, is a regular visitor. A pair of disembodied legs reportedly walk up the stairs and a tall ghostly figure who stands tall at the top of the same stairs is another haunted happening! Alongside this, weird things such as slamming doors, cold spots and heavy breathing have been experienced!

From one of Leeds oldest buildings to one of the newest! Roomzzz Leeds City West has recently opened and offers boutique style apartment stays, which are ideal for larger groups, people who prefer self-catering or those in Leeds for business for a period of time.

If you’d prefer to stay somewhere where a bump in the night is not unheard of then we have a chilling collection just for you! Our Haunted Hotels Collection is only for those guests who are brave enough to stay! However, you don’t need to fear our friendly Infotel team who are always happy to find your perfect stay, whether for Halloween, business or leisure! Call the team on 01775 843417 from Monday to Friday during 9:00am until 5:30pm.